‘Draw Characters to Life’ – GILLES AND CECILIE c/o 2AGENTEN get powerful, imaginary characters up and dancing for their ADOBE PHOTOSHOP tutorials

GILLES AND CECILIE c/o 2AGENTEN created very special creatures for ADOBE. “When we received the request to be part of Adobe Photoshop tutorials, we were totally thrilled and jumped at the opportunity. It is an honor to be recognized as practitioners, and we went all in. What did we want to teach? How do we use Photoshop? What is our favorite tool? What did we want to develop for this purpose?

We knew for certain that we wanted to create a bunch of imaginary characters. Characters that would come together to play and dance. This last year has been isolating, and we wanted to make something uplifting and joyful. For us, dancing is joyful, and so are roller skating and cycling. Creativity is collaboration. All these characters meet to exchange ideas and movement.

The first thing we had to do was to break down our creative process. How do we create characters? Step by step, we made a list from rough sketches, editing, redrawing and refining. As creatives, we all use photoshop differently, and it is exciting to discover and learn how. We hope our tutorial will inspire new and seasoned photoshoppers in the future.”

GILLES AND CECILIE c/o 2AGENTEN is a multi-disciplinary creative team run by the couple Gilles Jourdan from France and Cecilie Maurud Barstad from Norway. They’re based in London, and create illustrations, interiors, installations, and wall paintings. They met at Central Saint Martins while studying graphic design and established their studio in 2006.
30.11.2021 show complete article

With ‘CAVIAR CHAMPAGNE TRUFFLE PIG’, EDITION PEIX is putting pleasure front and center in the new year. Eating, feasting and serving food are the topics. Twelve illustrators have once again created twelve illustrations, specially for EDITION PEIX. The unusual 33 × 100 cm format is an eye-catcher whether in offices, living rooms, practices or lobbies. With Agostino Iacurci, Manne Lalilian, Carmen Segovia and Tanya Teibtner, EDITION PEIX has chosen thrilling new international illustrators. Martin Haake and Olaf Hajek are on board again this year. All six illustrators are represented by 2AGENTEN.

Agostino Iacurci studied Visual Arts and Etchings at the Academy of Fine Arts in Rome. His practice embraces a wide range of media, including painting, murals, sculpture, drawing, and installation. Iacurci combines his artworks with scenographic spaces to transform the perception of given environments. Starting from specific topics such as the use of colors in the ancient and classical world, he questions issues of traditions and identity, investigating the process of idealization of underlying historical myths and their impact on the collective imagination.

Olaf Hajek was born in northern Germany on the border to Denmark and now resides in Berlin, Cape Town and Mallorca. He spent his formative professional years in Amsterdam, where he threw himself into the social and freelance illustration scene. His elegant, figurative, colorful, and textural work bears a strong sense of character and fine art sensibility. He exhibits regularly in galleries all over the world and appears ubiquitously at various awards : American Illustration, Images, Communication Arts, D&AD... Olaf’s versatile and ever-evolving work is well-established in all areas: advertising, design, publishing and editorial, with the occasional foray into animation, and he is destined to be one of the superstars of the genre for many years to come.

Manne Jalilian is an artist, illustrator, animator and designer based in Stockholm. His practice includes a variety of disciplines, such as illustration, animation, pattern design, mural painting, and editorial illustration. He has a Bachelor of Fine Arts in Graphic Design and Illustration from Konstfack University of Arts, Crafts and Design in Stockholm. He describes his style as playful, colorful and decorative. He often finds inspiration in his surroundings, such as nature, people, architecture, music, and film.

Martin Haake is an award-winning artist and illustrator. After working for several years as a freelance artist in Hamburg and London, he is currently living and working in Berlin, Germany. Martin’s work has received numerous international awards such as the coveted Yellow Pencil from the British Art Director’s Club, D&AD, and two prestigious silver awards from the German Art Director’s Club. His work is included in major international art projects around the globe. Martin’s work is influenced by the surrealists and DADA artists of the last century, outsider artists as well as children’s book illustrations of the 1950s. His first picture book entitled ‘City Atlas’ was published in 2016 and has been translated into fifteen languages.

Carmen Segovia lives and works in Barcelona, where she graduated in Film and Theatre Studies before turning her attention to drawing and painting. Carmen often leaves her drawing board to explore other countries and cultures. In Mexico, for example, she not only creates wonderful mural paintings, but also devotes her time to traditional embroidery art while on her travels. Carmen works as an illustrator for international clients, portraying stories in tusche and acrylic.

Tanya Teibtner graduated with a degree in Visual Communication at the University of the Arts Berlin in 2019. Her illustrations are characterized by her rich but subtle color palette, symbolic details and nostalgic atmospheres. They are analogue drawings with Indian ink and colored digitally.
30.11.2021 show complete article 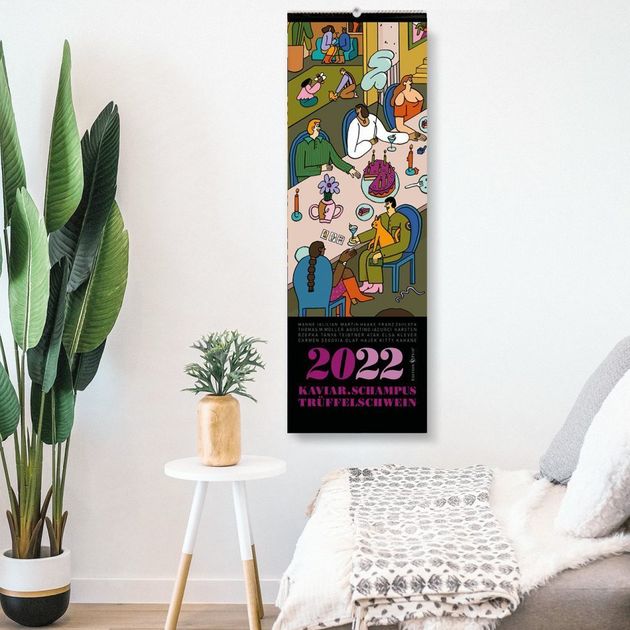 “Joint Impact – to make a difference, we need to work together. Because only together can we overcome the huge challenges we currently face… ” With meticulous attention to detail and an equally imaginative and stimulating animation, the creative team DAQ c/o 2AGENTEN visualized the MELITTA Annual Report. “Working together at a distance. Remote work after the COVID-19 pandemic is different from anything that came before it. And there’s no turning back now,” DAQ says about realizing the concept. Part of it all were Klee Steinberger and Nexxar from Vienna.

We have the result for you here on GoSee and via Melitta.
09.09.2021 show complete article