“Masterful in any genre, Ridley’s groundbreaking methods and peerless directing instincts have brought to life some of the most memorable films of our time, capturing the resilience of the human spirit and captivating the hearts and minds of audiences around the world,” said DGA President Paris Barclay. “Stunning visuals, immersive worlds and powerful performances underpin his diverse body of work which ranges from Alien, Blade Runner and Thelma & Louise to Gladiator, Black Hawk Down and, most recently, The Martian.

Over the course of four decades, his trailblazing career has demonstrated the impact and importance of the director’s singular vision. For these reasons, and so many more, we are honored to present the Lifetime Achievement Award in feature film to Ridley Scott.”

Ridley Scott was honored with DGA and Academy Award Best Director nominations for his work on Black Hawk Down (2001), Gladiator (2000) and Thelma & Louise (1991). He also received a DGA Award nomination for his most recent film, The Martian (2015). 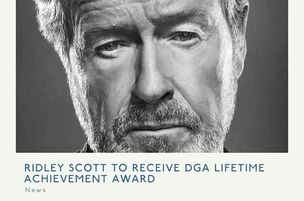 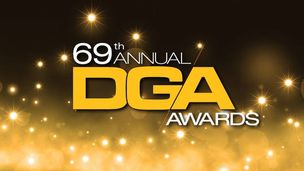 *Conan Christopher O'Brien (born April 18, 1963) is an American television host, comedy writer, and television producer. He is best known for hosting several late-night talk shows; since 2010 he has hosted Conan on the cable channel TBS. O'Brien was born in Brookline, Massachusetts, and was raised in an Irish Catholic family. He served as president of The Harvard Lampoon while attending Harvard University, and was a writer for the sketch comedy series Not Necessarily the News.

After writing for several comedy shows in Los Angeles, he joined the writing staff of Saturday Night Live. O'Brien was a writer and producer for The Simpsons for two seasons until he was commissioned by NBC to take over David Letterman's position as host of Late Night in 1993. A virtual unknown to the public, O'Brien's initial Late Night tenure received unfavorable reviews and remained on a multiweek renewal cycle during its early years. The show generally improved over time and was highly regarded by the time of his departure in 2009. Afterwards, O'Brien relocated from New York to Los Angeles to host his own incarnation of The Tonight Show for seven months until network politics prompted a host change in 2010.

Known for his spontaneous hosting style, which has been characterized as "awkward, self-deprecating humor", O'Brien's late-night programs combine the "lewd and wacky with more elegant, narrative-driven short films (remotes)".[11] He has hosted Conan since 2010 and has also hosted such events as the Emmy Awards and Christmas in Washington.[12][13] O'Brien has been the subject of a documentary, Conan O'Brien Can't Stop (2011), and has also hosted a 32-city live comedy tour.

With the retirement of David Letterman on May 20, 2015, O'Brien became the longest-working of all current late-night talk show hosts in the United States, at 22 years. (wiki) © // 1 file show complete blog 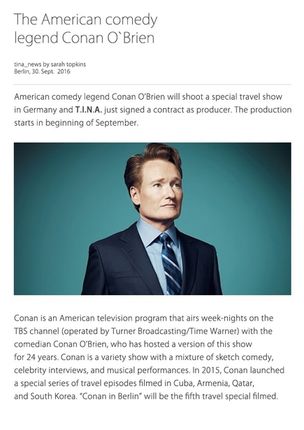 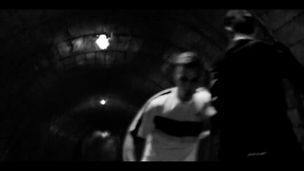 MOVIE // GOSEE FILM - GÖTZE, KANE & GRIEZMANN ARE THE STARS OF THE BEATS BY DRE CAMPAIGN