‘I’ll do it tomorrow’ – Roman Goebel photographs the cover for BARBARA magazine August/September 2021 with set styling by Kathleen c/o BASICS.BERLIN

“Friends of procrastination ⏳⌛️, right on time to kick off the weekend, a new issue of BARBARA is available on newsstands. Get their quickly and enjoy a wild ride!” BARBARA magazine says about the new issue. Do they really mean quickly, seriously? How is that supposed to work? Doesn’t haste make waste? Besides, we do everything laying down nowadays. Perhaps, we should do it tomorrow instead… ?

The cover was photographed without too much of a hurry by Roman GOEBEL c/o SHOTVIEW Artists Management with set design by Kathleen c/o BASICS.BERLIN. On the cover as usual, you’ll find namesake Barbara Schöneberger laying there extremely relaxed in the here and now, who can meanwhile look back on 58 covers. She has easily beaten Heidi by miles with that… It’s still quite a ways to Claudia’s 170th… We guess, Barbara will have to get back up at some point whether she likes it or not.

Basics.Berlin stands for competent, solution-driven consulting. Heleen and Barbara have established a domestic and international creative network over the past twenty years. The agency for hair, make-up, and styling is known for close professional relationships to actors, politicians and other public figures, since several of their visagists have been booked regularly for many years for film premiers, the Berlinale, award ceremonies, covers,… GoSee : brigitte.de/barbara & basics.berlin 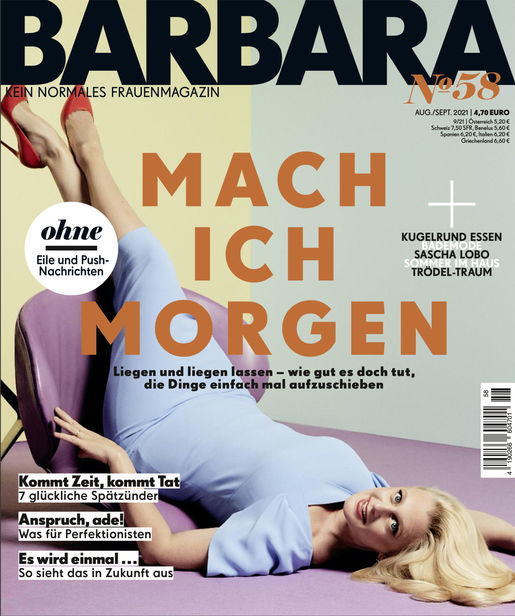